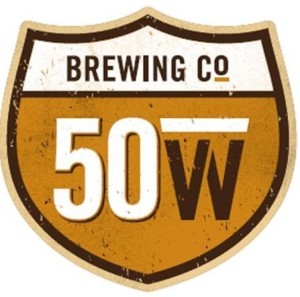 On the final day of our visit to Cincinnati, we resorted to, what else, visiting some more breweries. After hitting the newly (and amazingly) revamped MadTree Brewing, we needed a bit to eat and some more beers to try, and headed out to Fifty West.

Cincinnati apparently has a thing for beautiful breweries. Rhinegeist is fantastic, Taft’s Ale House is gorgeous, MadTree is stunning, and now Fifty West, which was charmingly perfect. Set inside a former roadside speakeasy on US Route 50, the restaurant/brewery looks like your Grandma’s house on the outskirts of town. It kind of feels like that on the interior, too, with the restaurant being divided up into the old rooms of the home and a lot of the original woodwork still in place.

I can’t say I can speak quite as highly of the rest of the experience. They’ve got a pretty decent menu, and we were pretty hungry, so we went with a bunch of small plates for the table. We ended up trying some pork belly french fries, onion rings, and cucumber feta dip served with pita. Don’t get me wrong, everything was good, but nothing seemed really memorable.

Same goes for the beer. Everything we tried was well done and tasted good, but nothing really stood out. They were highlighting some kind of whipped cream birthday cake beer type thing, but I didn’t get it. There was clearly some lactose involved to make it a bit sweeter than normal, but that’s about all of the claimed flavor profile I could pick out.

To top it off, the service was a tad on the slow side, adding to the relative forgetfulness of the experience.

On an interesting note, the brewery apparently bought the bar across the street, which also brews and serves their beers. Except this isn’t any ordinary bar – it’s one of those mega bars complete with several giant sand volleyball courts.